I find immeasurable comfort in the fact that if I ever crashed a plane into the Pacific, narrowly avoided a grisly death and found myself stranded on some tropical island, there is a chance that I would still get to eat some poke every now and then. That I might be able to fashion a net, reel in something edible, and Gilligan’s Island my way into a coconut shell bowl full of raw fish. If I ever did find myself in such a position, forced to grow a dirty beard, befriend an inanimate object to keep from cranking the crazy dial up to Charlie Sheen, and wear a grass skirt over my jiggly-bits, I know without a doubt that my greatest discomfort would lie in the fact that my freshly caught, feverishly eaten, nirvana inducing concoction was still somehow not as good as the stuff at Big Island Poke in Renton. 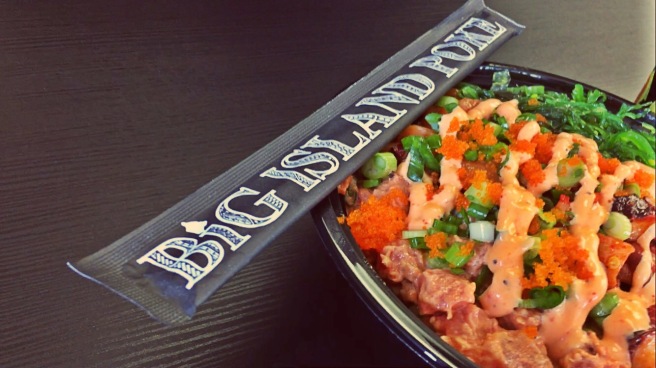 To help me come to terms with this frustrating realization, Krishan called up his buddy Jaydean Gabriel, the owner of Big Island Poke. Jaydean agreed to come and hang out with us at his restaurant and explain why, if he had been on that island with Tom Hanks in Castaway, Hanks would have rolled up his ‘Help Me’ sign and just lived out the rest of his days there.
Krishan and I pulled into the lot in Renton about 45 minutes early so we could shove poke into our faces and weigh the consequences of eating one’s entire body weight in fresh food and going bankrupt at the age of 26 against the taste of expertly marinated fish. No contest, get me a rascal scooter, some sweatpants and a box under an overpass. I’m all in. The interior of the place is simple and slightly industrial, unsanded wood screwed into the walls, steel on the chipotle-style serving bar, black laminate signs with the food specials on them. Behind the counter, silent and succinct in their purpose, the servers dump food into plastic bowls, moving with an easy grace, serving in a consistent, almost animatronic way. Everybody gets the same sized scoop, sauce from left to right.

Bob Marley through the speakers, rhythmic and unencumbered.

If you’re having a hard time finding this place on a map, don’t feel bad. Google doesn’t know it’s there yet.(You know you’re being a good hipster when you start beating Google to the punch.) At the time this piece is being compiled, if you type the address into Google maps, you’ll see a photo of a building that’s not a Subway, not yet a poke place (isn’t that a Britney Spears song?), its picture windows looking out over Rainier Avenue.

“I wanted to put this place in Renton,” Jaydean tells us from across the table, trying not to look directly at Krishan and me as we trash compactor food into our faces. “It’s diverse. You got every culture, a lot of different backgrounds. It’s close to Seattle, close to Tacoma.”

Krishan and I grunt our approval through our mouthfuls of goodness. 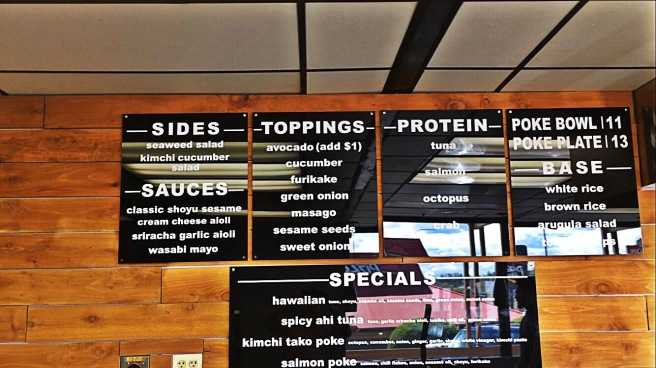 Looking around at the clientele in the place, he hit the diversity nail on the head. There are islanders, haggard looking construction dudes, Boeing employees and dyed in the vintage wool hipsters mashed into that place, forking raw fish into their worldly faces.
“How’d you first get the idea to start this place?” Krishan asks. Jaydean tells us a story that is not unlike a lot of success stories you hear from people who don’t know they’re awesome. Lots of perceived luck, bunch of right place at the right time, and a good deal of humility. But when you really shove all the accoutrements of the story to the side, rinse off the marinade, blow the nori flakes away, and get down to the meaty part of it, you realize that this guy just works his ass off. There are several points in the story where Jaydean throws out the words “just kinda worked out” and hip rolls past a lot of late nights and early mornings. Jumps over a lot of things that anyone who’s ever had a business plan fall apart on him wasn’t willing to do to get shit done. He does this, not because he’s running an angle, or trying to be humble, but because he just couldn’t imagine not working that hard.

Early in 2012, Jaydean was working as a mechanic. He had gone to school for it and landed a job at it and, long term, he had planned to open his own mechanic shop and run it himself. But after 7 years at the trade, he was starting to see it come apart at the seams. He just wasn’t happy. Right around the time he was realizing this, a buddy of his had rolled back into town to visit. His friend was living in Los Angeles (the mecca for food trucks) and hating his life pretty good and hard. The two of them got a couple of drinks in them and started talking escape plans. 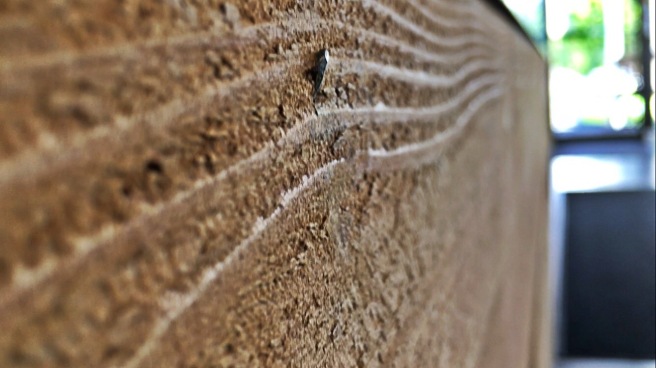 “We’ve always cooked. I like experimenting with food, and I like to eat,” Jaydean says. He brought up the idea of a food truck.

At that time, food trucks were hitting the streets of LA like STDs at a Sublime concert. Popping up in parking lots and drawing people to them with a salty magnetism that couldn’t be denied. “That’s weird,” his friend had said, “I’ve been thinking of doing the same thing.” They talked about menus and hashed out business plans and then his buddy went back to Los Angeles and Jaydean went back to work.

This is one of those junction points. This is where 90% of all best friends who want to start a detective agency or guys at adjacent cubicles who want to be sky diving instructors find themselves dead in the water. They hash all that shit out at a bar, and they swear up and down that they want to do it, and then they wake up in the morning and have themselves a pee and go back to hating their lives.

Instead of doing that shit, Jaydean bought a truck. It needed work, so he fixed it up at the mechanic shop any time he had a moment to himself. Within a fairly short period of time, he’d installed a kitchen, complete with fryers, sinks and stove tops. His buddy moved back to Seattle and the two of them went full commitment, Mike Tyson on a Hoverboard, into the food business, praying silently that they wouldn’t end up like Mike Tyson on a Hoverboard.

“So tell us about how this place came about,” Krishan says.
Jaydean had always wanted to open a poke place. He’d originally wanted the truck to serve only poke, but his original business plan had been focused on a wider audience. As time wore on though, he realized you just can’t please everyone. “You can’t cater to everyone. This…” and he motions at the restaurant around him, baseball on the television and reggae on the speakers, rice steaming in metal pots, “…is not for everyone.” So Jaydean whittled the menu down to something he was really passionate about. He describes shuttling back and forth between Hawaii and the Philippines with his parents when he was younger. There, on the big island of Hawaii, poke became a natural staple of his diet. “Breakfast, lunch and dinner” were his exact words. 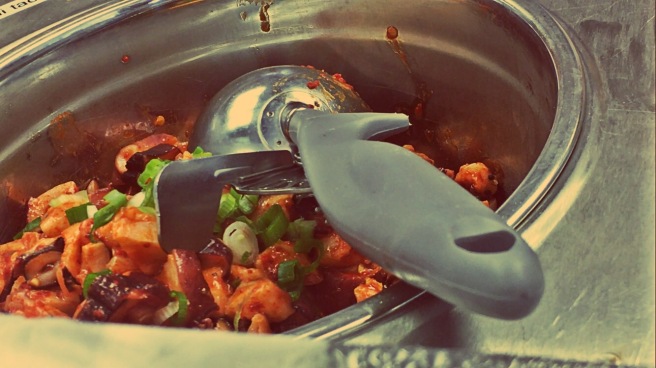 As he got older, he learned to make poke himself through local recipes and trial and error. He started putting his own twist on it as he became more comfortable with the dish. Soon it was his thing. He took it to potlucks, made it for parties or just threw it together when he was feeling it. Now, an ocean away from the sunny winters of Hawaii, in the land of grunge and flannel, poke has become his comfort food. A safe place where he can roll up his ‘help me’ sign and just be where he is. Looking around the sun splashed restaurant manned by his friends and family (without whom, Jaydean insists, none of this would be possible) and full of happy, diverse people and the smell of fresh marinated fish, one can’t help but agree – this place is a good place to be.

16 thoughts on “Big Island Poke: Getting Raw in Renton”