I first stumbled into Lincoln District a few weeks ago, wandering Tacoma like a coyote, on the prowl for something new.There was some unforgivably smooth shit slithering through my speakers, painting the interior of my car in shades of sepia, hanging like smoke in the sunlight that was shining defiantly onto that quiet stretch of street. A rim of clouds lined the horizon in every direction around me like a violent purple iris of rain and sleet, but there in the pupil of Lincoln district, the sun was out and the jazz was smooth and I was into it. According to the radio host, KNKX connects me to Jazz, Blues and NPR news. It also connects me to the pleasure centers of my brain and to neighborhoods, apparently, because Lonnie Johnson started moaning into the microphone, picking at that guitar and the brick buildings reared up around me, spindly trees dancing in a winter wind and I coasted it into a lot on South 38th and S. Tacoma way because I was supposed to be right there, right then. I wandered into Zocalo Tortas and ordered at the counter. Planted myself in the seating area where the sound of the soccer game on the television was unfolding itself into an empty room. Roaring crowd and excited commentary humming between the windows and the glass case full of handmade Mexican pastries. Empty chairs and cleared tables. 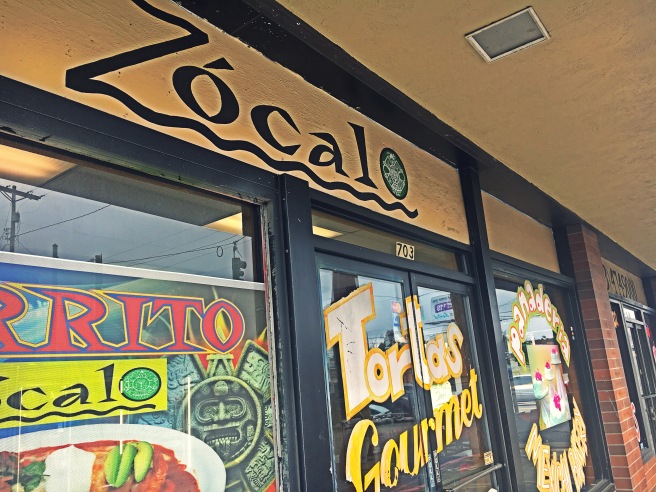 Coming down off my sunshine and blues euphoria, a feeling of apprehension rolled itself down my back like a cold fingertip. When my food came out I asked the waitress,

“Is it usually this quiet in here?”

Totally dead at lunchtime on a weekday? Not even one lovable old guy whose kids don’t visit tucked into a corner near the TV?

“Sometimes it’s quiet.” She said,” People are moving out.”  and she scooted my food towards me, pointed out the salsa bar, headed back to the kitchen.

I shrugged my shoulders. I bit into my sandwich. 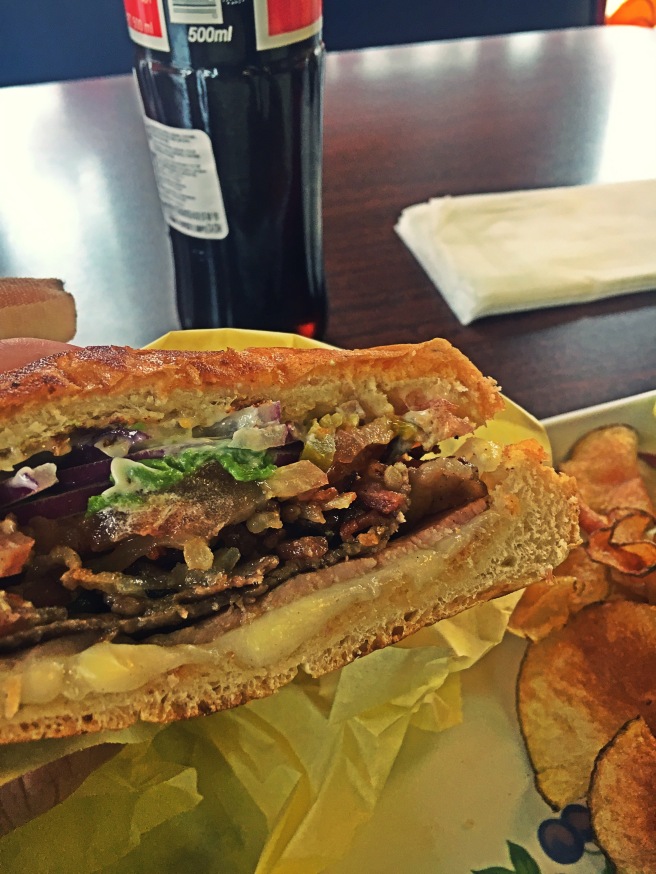 Time got away from me after that. I know that I made some noises, but I don’t remember how loud. There were flashes of meat and bread hurtling towards my face and the sound of gnashing teeth and then when I came to the sandwich was gone and I had more questions.

I cornered her by the register. Saw her recoil at the fresh-from-the-oven wild in my eyes.

“Why aren’t people lining up out the door for these sandwiches?”

And she smiled a sad and appreciative smile.

“People are moving out.”

I stood in that magical sandwich shop staring out the windows at the buildings full of character and history, shining in the sunlight against a frothy sky, wondering what could keep anyone out of a neighborhood like this one.

If you’re ever looking for a potent metaphor to describe a neighborhood in flux and you stumble across something more telling than the Rex Theater in Lincoln, email me about it. I’ll give a cookie or something.The Rex was built to replace a smaller theater in 1919 and was one of the first theaters to include a nursery near the lobby where parents could care for their children while still being able to see the screen. When it closed in 1958, it was passed off to a series of churches, who held their congregations in it. One website I visited said that it’s been a church ever since, which is bullshit because It was a porno theater for a while in the 80s. After a lot of guffawing it was changed back into a church again and according to google maps and the sign out front, it still is. Hard to tell exactly what’s going on from the street though. The phone number is disconnected and the windows are boarded up. Not unlike the Rex, Lincoln’s start as a definable neighborhood was exciting. It quickly established itself as an international district, hosting a handful of fantastic Vietnamese restaurants and an Asian specialty grocery store. Lincoln was a diverse progressive place to get good food. Gang violence began to become more prevalent in the 90s. In 1998, gunman burst into the Trang Dai Cafe and shot people indiscriminately. 5 dead, 5 wounded. The killing was carried out over a personal dispute with the owner. Lincoln began to feel less safe. People started moving out. In 2001, the city closed a bridge that connected mall traffic to the neighborhood for the better part of a year. It severed the femoral for local businesses that depended on that transitory business. More people moved out. The financial crisis of 2008 decimated much of what was left. The neighborhood was clearing. 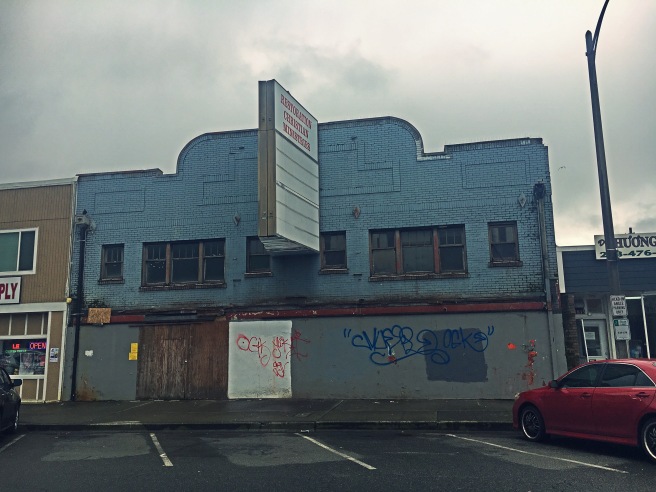 2 Days later found me back in Lincoln on my day off, wandering up the block to Zocalo with a book bag under my arm, singing a sandwich song I made up about tortas as one is wont to do on a blustery afternoon. I had parked on a different street than the day before, which meant a different route to Zocalo, which meant walking past a window full of BBQ’d ducks, which found me frozen in front of a window with a song about sandwiches stuck in my throat. Before I knew what I was doing I had hovered to the door and a gust of wind blew it open, blew it the fuck open and there I was, standing in the dimly lit place, saliva pooling in my open mouth. There was a loose gaggle of people in the corner. There were two elderly Chinese women at the bar. There was Sesame Street on the television in the corner. Everything had ground to a halt with my arrival, chopsticks hovering over bowls, food hanging from them. Everyone was staring at me. An atavistic voice in my head told me to shimmy back out the door, but that same voice saw those ducks hanging, crispy and caramelized, and thought, DUCK=GOOD and planted me on the spot. A chef sauntered out of the back with a cleaver like a steel book with a handle on it gripped in his muscular palm. The spell was broken and the eyes swiveled down and the eating recommenced.

I held a finger up, like, ‘table for one please’ and he pointed a finger at the bar and I sat there. Elmo was spelling the shit out of the word apple and the old lady at the bar beside me was still staring at me.

The chef with the cleaver said,

And I asked for a menu and he pointed at a chalkboard crawling with Chinese symbols. Help me Elmo. I thought, but he was juggling apples. The chef saw the panic in my eyes and he said,

“Do you want rice or soup.”

“Do you want duck or pork?”

And a grin splashed across his face and he walked over to his work station and that cleaver was singing on that cutting board, walloping through meat and bone while Elmo juggled apples.

The meal that followed was bliss. I haven’t stopped talking about it for three weeks over and over again to absolutely anyone who will listen to me. Crispy duck skin, tender pork meat. Dollop of rice with a dressing. The kind of perfection that comes with hard learned lessons and time to practice.
“ How long have you been here?” I asked the chef with the cleaver.

I’m flossing with a duck bone. I said,

“How are things going?”

“Going to retire soon, I think.” He said.

“No!” I want this place in my life forever like a family pet.

“Will you pass it on to your kids?” Hope sparkled in my eyes.

“My kids are American Kids. They’re doing their own things.” He said it with pride. No bitterness.

“One of the other restaurants on the street was saying that business is tough and that people are moving out.” I offer.

He nods sadly at the street. 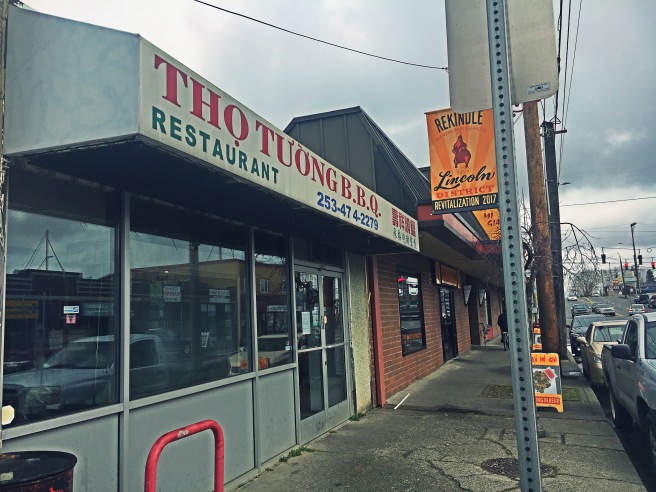 On the walk back to my car I stopped on 38th street and turned in a full circle. From that spot I could see Vien Dong, a legendary Tacoma Vietnamese restaurant, Dragon’s Crawfish (a by-the-pound Cajun spot), a burger joint, a Chinese noodle house, my beloved Zocalo and the BBQ place I’d like to be buried in, Tho Toung BBQ. All on one block. Banners hanging from the street lights  snapping in a malignant wind, flashes of retro color against the pallid sky. They say, “reboot Lincoln” and “rejuvenate Lincoln” and “restore Lincoln” and they’re part of an 8 million dollar effort on the part of the city of Tacoma to tilt back the head of this neighborhood and breathe life into it. The artwork on the banners and some of the murals that have been added to the beautification process were conceived with the help of Lincoln high school students, who had set out into the community to restore it long before there was a city project involved. Kids who saw problems in a neighborhood they cared about and set out to fix them.

And sure, Lincoln has its problems.

Yes, there are empty buildings in Lincoln. It has potholes and homelessness and blight. But Lincoln has heart. It has character. Lincoln has strong willed people  who would rather fight for their living, then abandon their homes. People who came from other places and settled here and raised American kids and have American dreams.

And right now, Lincoln needs us too.