Find me in the simulated darkness of the bar with the rain pressure-washing the windows and the brake lights on 6th through the drops on the window like Christmas lights.

“Get you something?” the bartender asks.

“Can I just get a sarsaparilla?” tumbles out of me sounding a lot less reasonable than when it popped into my head. Just a dude alone at the bar, sipping on a sarsaparilla like he’s not a serial killer. Tough sell. In my defense, though, I’m about to consume a lot of bourbon and it doesn’t do much for your credibility if you show up to a liquor tasting and they aren’t legally allowed to serve you. I sip my sarsaparilla. It’s fantastic.

I swear to god I’m not a serial killer.

A PR firm emailed me to invite me to a private dinner at Seattle restaurant 2120. A special menu had been made to pair with Maker’s Mark 46, a new blend the American whiskey mainstay was rolling out. There would be tastings of several different Maker’s Mark products, as well as a series of signature cocktails designed to be accentuated by the individual entrees served on the 6 course menu. This is an awesome way to showcase the full range and adaptability of your product. It is also an awesome way to make a lightweight such as myself wake up in the street with no pants on. So I bellied up to the bar in the rain, in the dark. Sipped my sarsaparilla.

“John Laugherty called a meeting of all the employees at Maker’s Mark. He flew me in from London, and I knew it had to be a pretty big deal.” The woman speaking is a maturation specialist. The emblem on her dress says Maker’s Mark and the Kentucky in her accent is syrupy and drawling and she knows her way around some whiskey. She tells us the story behind some of the new products. About the straying from usual business. About legacies and whatnot. We sip on our welcome cocktails and watch her speak beneath the twinkling lights as 2120 bangs and whirs around her and she stands in the middle of it all like a street performer on a subway platform. The welcome cocktail is fruity and effervescent, laced with strawberries and the sultry draw of bourbon. 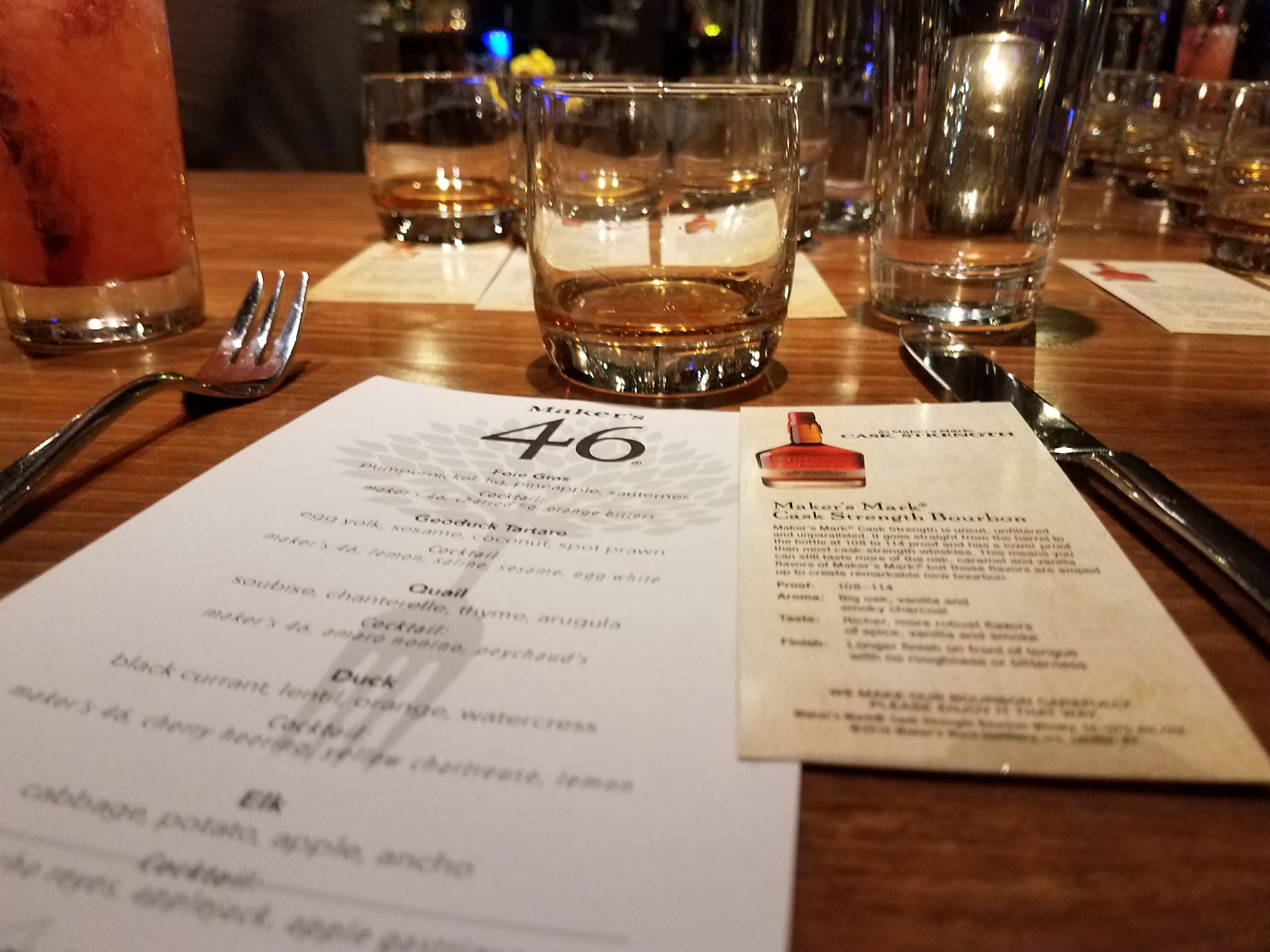 While she speaks and we sip, servers hit the dining room with pre-poured glasses in hand. They are arranged in front of us with a clink, carefully placed atop cards with descriptions. Bourbon in the raw, amber in color, varying in flavor. Maker’s Mark Cask Strength is absolutely raspy. 112 proof, hit you in the tonsils kind of bang bang. Jet fuel, but enjoyable. Then the Maker’s 45. The original. Slow on the draw, smooth on the finish. It’s followed immediately by the new one, Maker’s 46, which could be described as a melding of the first and second. Sultry and smooth but with a bite at the edge of it. Someone at the table says that they’d use the first one as a mixer and the second as a sipper. Everyone nods. Now the Private Select. Easily one of the best sips of bourbon I’ve ever had. Vanilla at the front of the pallet, crackling at the back of the tongue. Goes down the way a firework goes up, bright lights down the middle, bang at the end.

The dark is gathering outside the windows and we are left to our little glasses of liquid heat, our little flickering candles. The women from the PR firm are piled into the booth beside me, fighting a valiant battle against jet lag and alcohol. The rest of the people at our horseshoe table are locals, who are fighting only with the alcohol but faring no better. We are fading fast in the semi-darkness, a tropical storm of perfumed booze settling in our basements, sending fumes up into our attics. Salvation came, as it usually does, in the form of excellent food.

Six courses, served back to back, carried from the kitchen by a 6 man breaching team of cooks and waitstaff. The door bangs open and they rush in with their arms full, dropping payloads on place mats and disappearing into the back as suddenly as they came. Foie-gras, rich and decadent atop a bed of charred pumpernickel. Little meaty figs rounding out the flavors, splash of pineapple for good measure. A cocktail of Maker’s 46, charred fig and orange bitters accompanies it and the symmetry is fairly self explanatory. Boozy richness, splash of fruit and smoke. 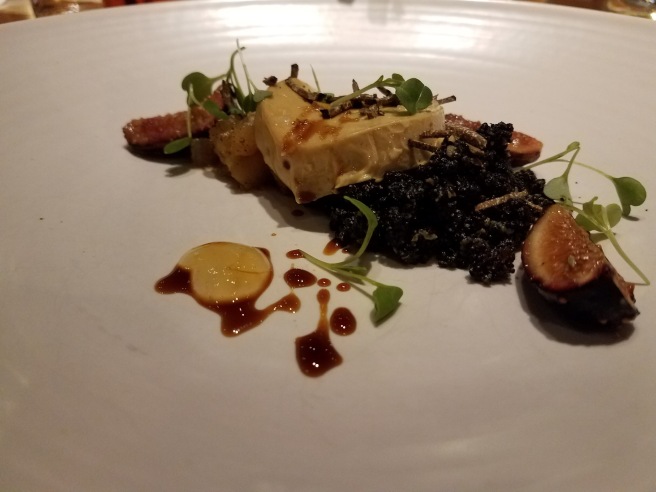 Next course is a geoduck tartare, served in a coconut with a brick of dry ice puffing vapor out from underneath it. Chunk of shrimp swimming in a squeeze of lime, crawfish head peeking straight up out of the whole deal like a masthead. I attack this one like we aren’t in a candlelit place eating out-of-town-company food. Grunting and smashing. Fists and fingernails. Literally suck the brains out of the crawfish, much to the chagrin of the PR people, who, I’d like to reiterate, are from a rough city and are by no means squeamish. But when you’ve got it, you’ve got it. And in this department, I most certainly have it. The cocktail is a sharp little thing in a martini glass. Foam of egg whites with toasted sesame seeds floating in it. Puckering and nutty. 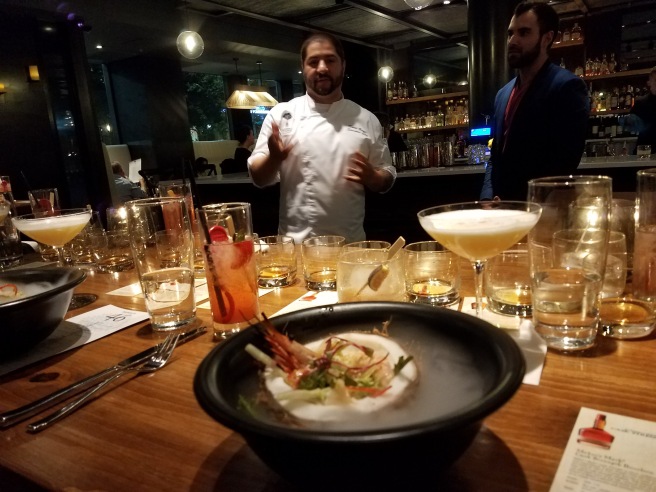 The quail comes out on a jet black plate, propped up in a snowdrift of soubise, a white onion sauce, and I gnash it all off the bone and rinse my mouth with the snazzy little beverage that it came with. The food is excellent. The beverage is stiff and mature like something James Bond would throw back. Daniel Craig Bond. The salty one. At this point, I’m pacing myself with the whiskey. If you’re keeping track, I’m roughly 5 shots of dark liquor deep in a pretty compressed period of time, and given my usual drinking habits (a beer a night) and my stature (troll doll-esque), this could really be one of those evenings where you wake up in the street without pants. Bond would do no such thing, and so I don’t intend to either. 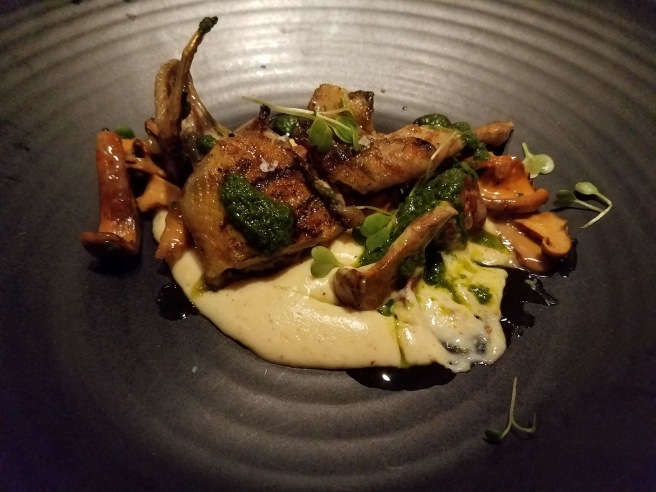 I sip my beverage responsibly, poke and prod at my PR compatriots. They’re unflinchingly New York in that impressive way that makes you tired for them. My brother-in-law is a hedge fund manager in New York. He works 80 hours a week, minimum, cooks souffles in his off time and jets off for the weekends to go heli-skiing. Did you fucking hear that? Heli-skiing. Not hella-skiing, as in a bunch of skiing, which would still be pretty impressive after an 80 hour work week. Heli-skiing. As in, jumping out of a fucking helicopter with skis on. These PR women have the same thing going on, to a slightly less glaring degree. Jet-lagged, slamming whiskey on zero hours of sleep, chatting about whether they’re going to go clubbing or hit the gym when this is over. “You could sleep,” I say. “I’m going to go home and go to sleep.”

I nod, like, ‘totally’ but I’ve got a hot date with a pair of footie pajamas after this. 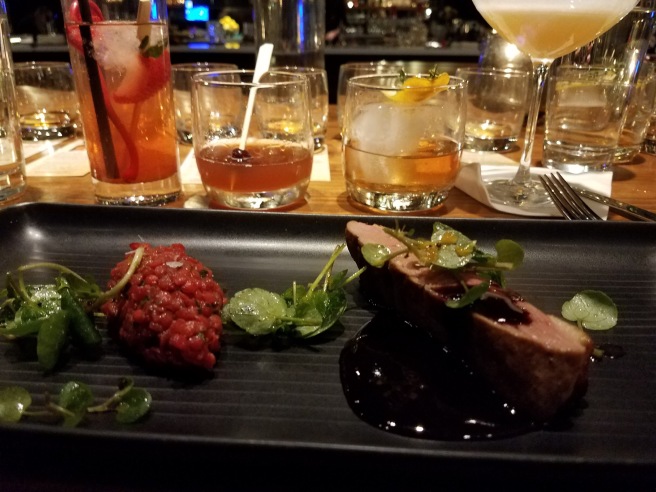 The breaching crew comes banging out of the kitchen with slabs of smoky duck beside a crimson mound of lentils that I initially mistake for tartare. Sprinkle of watercress, drizzle of black currant. The flavors are sweet and deep and complicated and when I come up for air I realize I’ve missed the description of the cocktail that accompanies it. Something in a tumbler with a lemon peel sticking out of it. The menu says, “Maker’s 46, cherry heering, yellow Chartreuse, lemon.” and I’d be lying through my teeth if I told you that I knew what all of those things were, but I sip it carefully and find it pleasant. A perfect corner piece of freshness to the complex flavor puzzle that was the dish. 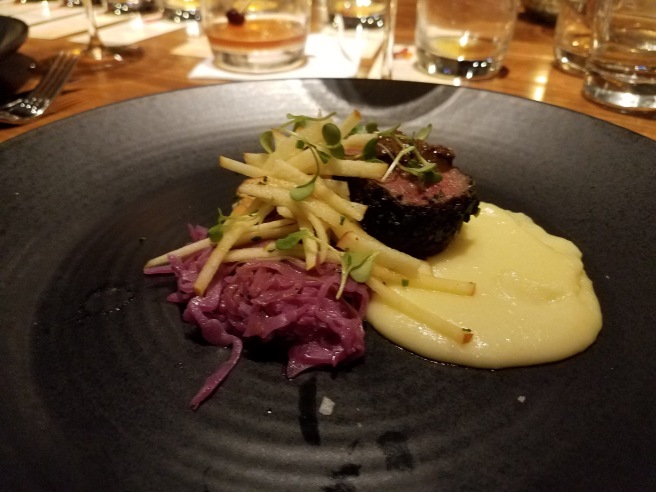 Full dark out the windows now. No cloying rub of twilight blue to the west. No moonlight between the buildings. Just swinging overhead lights and the sparkle of tail lights on 6th. There is a medallion of elk in front of me, just like the menu promised there would be, a lean-to of matchsticked apples, a confetti pile of cabbage, a dollop of mashed potatoes. Its pairing beverage is in a Martini glass with a slab of apple gastrique sticking out of it. All of it is excellent. A fitting, well balanced, end to (the savory portion of) our well balanced meal. 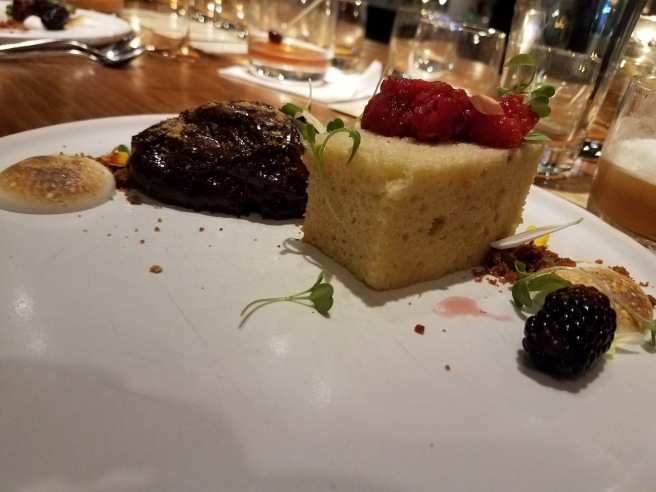 While the crew brings out dessert, the maturation specialist from earlier slips back out into the spotlight to thank us for coming and it is the sincere, warm, thank you of a person who is passionate about what she’s doing. Dessert hits the tables, a veritable smörgåsbord of different treats in a loose formation on an all white plate. Cakes and mousses, smears of compote and dustings of sugar. Like everything that has come before it, it’s delicious. A final cocktail for the evening – Maker’s 46, amaretto and elderflower.

I sit in the dark cocoon of this whirring restaurant sipping my cocktail, going over the fantastic meal I’ve just experienced, prepared with love and attention by serious people who believe in what they’re doing. It is a truly magical moment. A moment that couldn’t be ruined by jetlag or waking up pantless in the street. In fact, I think to myself that if I found out that everything we’d just eaten was people, it might cost 2120 a Yelp star, but it wouldn’t ruin my night.

I’m really not a serial killer. 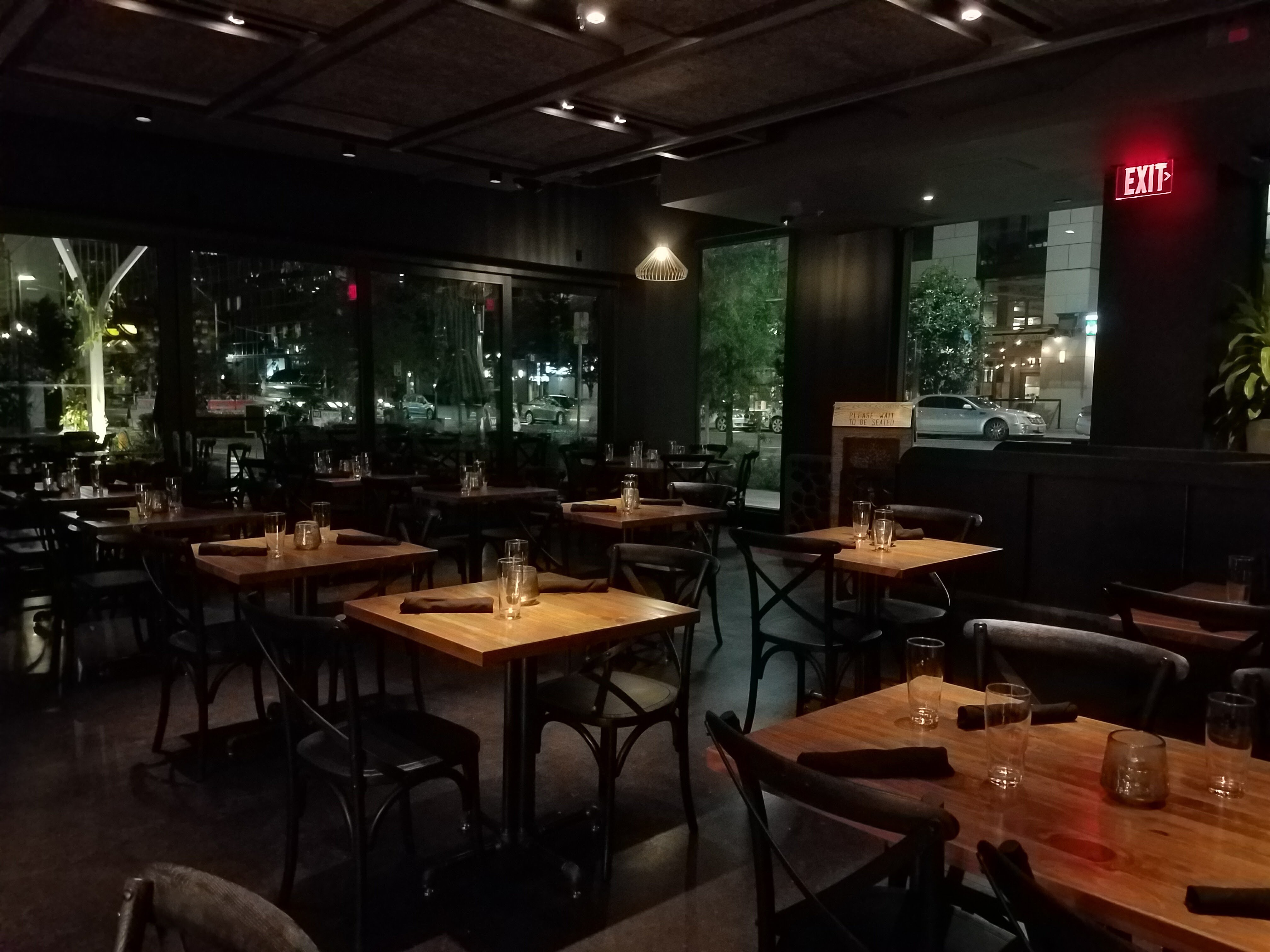 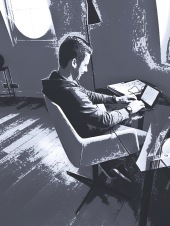