We were going to let this die. We were going to leave this parked under the oak tree in the backyard like an ’83 Lesabre. Let the land retake it. Have it grow a mold you can’t scrub out. Let the internet equivalent of mice make a home out of it.

Goat Federation got us to where we were going. It put some miles beneath us, taught us some lessons, pointed us in the right directions. But eventually, the wheels kinda fell off it.

Krishan opened a food stand that is turning out some absolutely, obscenely good bang-bang.

I whipped up some articles for a few different papers, created some content for some local blogs, then I went off to work for the State as an investigator.

For me, food went back to being one of those things that you slapped together when you weren’t doing other things. I cooked, yes. I went out to restaurants, of course. But I didn’t take pictures anymore. I didn’t write about it. The desk job certainly didn’t help. A 30-minute lunch break at a job site with ‘natural selection’ parking, doesn’t offer much time for dipping out for a bite to eat. My homemade sandwich and bento box game got strong,

but my meal diversity took a leave of absence.

It is here that we get to the meat (or lack thereof) of our story. Because in the span of a week, I went from being a guy who had a fridge full of exotic food that I had to shovel down on a working lunch break, to being a guy with a rapidly emptying cabinet full of mundane nonsense and nothing but time to figure out what to do with it.

It was terrifying at first. I would stand in front of my barren shelves, anxiety humming like a deep sunburn on my shoulders, wondering how long it would be before I could get bread again. Wondering if I was going to have to throw ‘bows at a Trader Joe’s for canned goods. 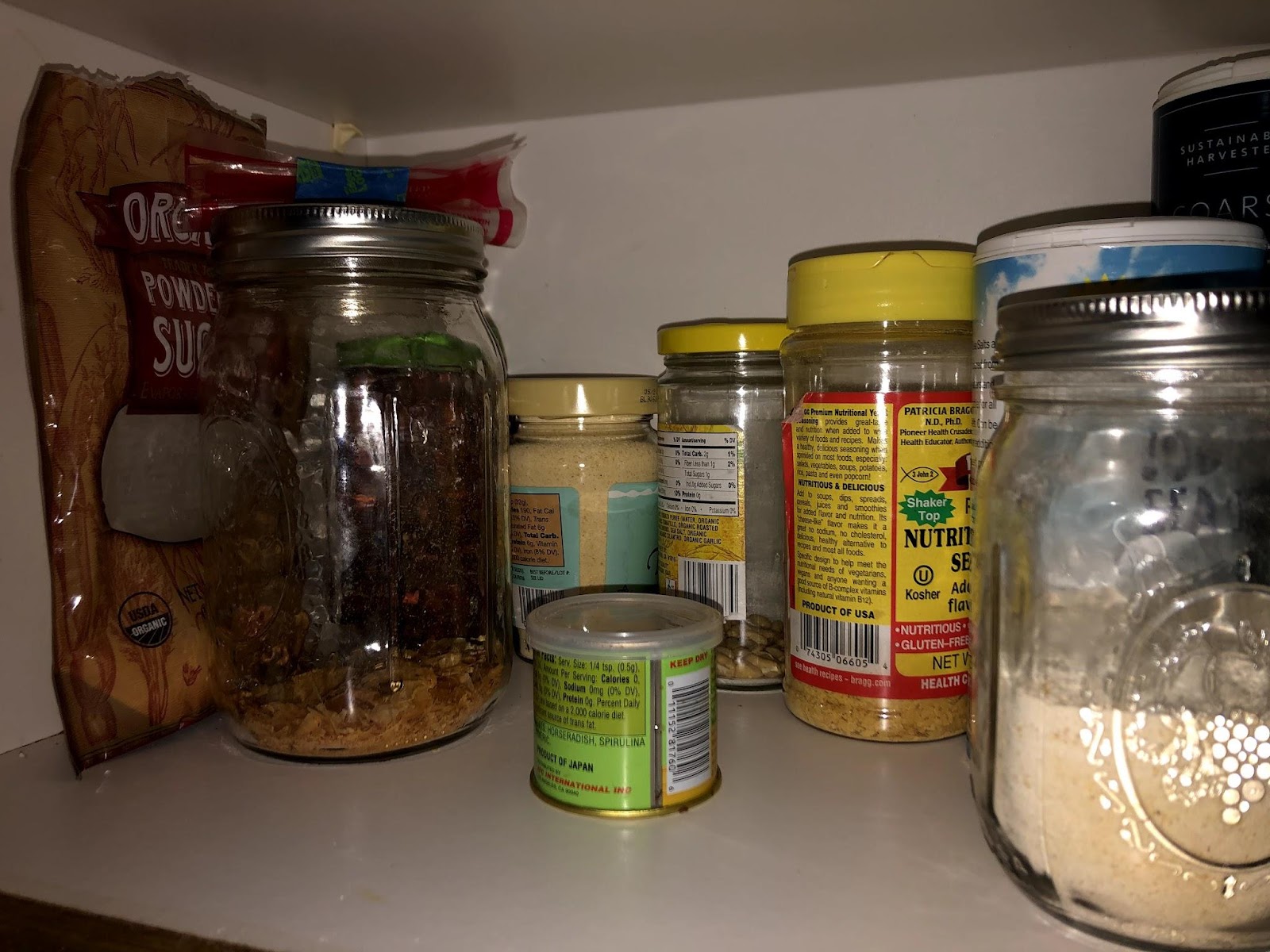 I was standing like that in my pantry, thumbing through Pinterest recipes that had ‘lentils’ as a keyword, shaking my head because I had some of the ingredients, but not all of them and suddenly, something just clicked. or snapped. I don’t know, they’re similar sounds. Anyway, I just started grabbing things. I grabbed handfuls of ingredients and I Dr. Frankenstein’d my ass over to the stove and I started improvising. Canned tomatoes? I had some old tomato paste. Tomato Sauce? I had half a box of pre-made tomato soup. I spiced the bejesus out of it. Dash of this, sprinkle of that. Poured some juice from an empty jar of olives in there for a little briny-ness. I was doing it.

The whole time, I was looking over my shoulder, trying to get this monstrosity cooked and plated before my wife followed the smell of failure into the kitchen and asked me what in the actual fuck I was doing.

20 minutes later found me sitting in front of two strangely colored bowls of spaghetti in a lentil bolognese. It was red-orange from the tomato soup. It was thicc from the tomato paste. But most shocking of all…

After that, every night became a wasteland version of Iron Chef. Someone lifts the lid off a pile of nonsense ingredients and I scramble over and grab an armload of it and just start making magic out of it.

Crackers out of nutritional yeast and masa flour.

A pinto bean version of Hoppin Johns with Cuban sensibilities.

So as I said at the beginning of this crazy rambling: we were going to let this site die. We were going to leave Goat Federation to rust in the hungry woods of the internet because things had changed and we didn’t need the lessons that it had taught us anymore.

But now things have changed, again. Now it feels like this old blog might have some new lessons left in it. So I’m giving the tires a kick. I’m giving the engine a jump.