So…I walked into a convenience store in South Park and ended up having the best banh mi sandwich I’ve had in Seattle. Doesn’t make sense right? But just because it doesn’t make sense, doesn’t mean you shouldn’t try it for yourself. As I mentioned earlier, this is in South Park, so don’t forget to put the chain back on your velcro wallet because you might not come back home with it if you don’t (joking of course).

I walked in with my wife to ask the store clerk where the pho restaurant was because we walked around the building once already and didn’t see any obvious doors to the place. After walking into the store, we saw a separate section with tables off to the right and looked at each other like…”uh, is that it?”…and shrugged.

I could tell she was on the same page of yolo’ing as I was tonight so she was down. The guy behind the counter, Jimmy, was immediately really friendly and asked us if we had been in there before, then gave us a few recommendations from the menu which consisted of a fusion of Vietnamese, Korean, and Mexican influences. Their main dishes were pho and banh mi with a twist.

We both opted for the “El Fuego” banh mi and an order of Korean carne asada curly fries to share. Jimmy then told us that we could grab a couple drinks from the convenience store side and bring them back over if we wanted to. I was tempted to grab a 40oz of Old English as some of the other patrons in the store were doing and just brown bag it but I settled for a bottle of tamarindo Jarriotos instead. No brown bag needed.

The “El Fuego” banh mi consisted of spicy pork with pickled veggies on a bolillo roll lined with garlic cilantro mayo. The ratio of meat and pickled veggies to bread was perfect in every bite and the cilantro garlic mayo really came through with a nice flavor. I really appreciated the fresh and airy bolillo roll, which was not the usual cut the hell out of the roof of your mouth type of baguette. I’ll have to come back and try their pho next time. Their broth is made with beef bone and boiled for 16 hours, made fresh everyday.

Random places like Phórale are sometimes where we find the best foods. Most people would pass by this place for years without knowing what they are missing out on. Although, I’m not saying that you should try the sushi at the next truck stop you pass by. 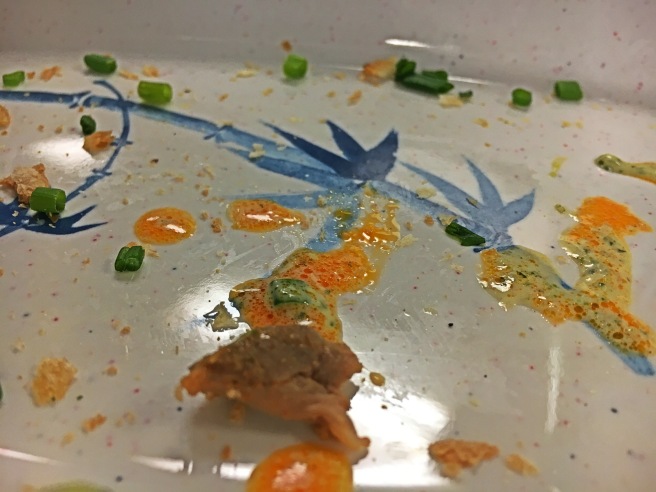 Next up…steak at a strip club!

One thought on “Phórale is Definitely For Real”