There’s a place in Kent, just off Military Road south where they sell epiphanies. It’s not on the menu, but shit like that rarely ever is. In my limited experience, earth shattering moments like this are the kind of thing that you should actively seek out. That you should prepare yourself for. Wandering into a moment like this because you like Food Network and marrow is a fun word to say would be like picking up a copy of A Farewell to Arms because you were done with the US Weekly you were reading. You’re liable to wake up in a holding cell unexpectedly with no pants on… or something.

If you are seeking, though, we can help you. If you’ve got some bail money lying around and you’re interested in tasting something so devastatingly good that it ruins your goddamn weekend, punch the words Asadero Sinaloa into your Google maps app.

Go there.
Order some bone marrow.
Eat it.
Remove your pants.
Prepare to be arrested…or something.

1:30 PM on a Friday found Krishan and I sitting across the table from one another, marinating in the pervasive smells of good cooking. Grey skies out the windows and a sign that says ‘Mexican’ flapping enthusiastically in a rain-bringing wind. There’s spanish guitar on the speakers and praise and exaltation written by hand by the restaurant patrons in marker and pen on one of the walls.

Krishan and I are distractedly talking about some outlandish fist fight we got into with a shoplifter,
“Yeah, I thought he was going to bite your nose off too-”
making small talk like family in hospital waiting room. Then the waitress sashays through the kitchen doorway with a wooden board engulfed in steam and we both shut our mouths. The board hits the table, three halved pieces of mesquite roasted, Prime Grade, USDA beef bone, sprinkled with sea salt and finely chopped green onion. To continue the hospital waiting room analogy, the operation has been a wild success.

And now, a brief history of eating bone marrow:

According to thefoodtimeline.org (there’s a link below), eating bone marrow is something you’ll find in the operating system folder of the human hardrive. We were doing it back when everyone was humping under the stars and pooping in a hole. Prehistoric man was known to crack open a bone or two to get at that good stuff and scooped out bones were at the site of the first location at which Ancient Greeks used fire to prepare meat. However, unlike humping under the stars and pooping in the woods, which pretty much only happens at Burning Man now, eating marrow has endured. Pliny the Elder wrote about how to prepare it in The Natural History circa 1469 and the English perfected a special spoon just for scooping that buttery business out of the bone in the Elizabethan era. I’d say that Krishan and I eating it at Asadero Sinaloa goes to show you that it’s made its way to the 21st century, but if you saw us devour it, you might just think that someone had invented a time machine, and that we’d escaped from it.

Silence follows as we descend on our pieces, scooping the gelatinous marrow from the center with forks as fat drips down onto the plate in chunks and gobs. I load it into a fresh pressed flour tortilla and punch it into my face and for a moment I live alone in a world of contentment and fatty goodness. Rich. So rich. Like butter in a meat smoker. And smooth. So smooth. Who made this shit? Luther Vandross? It’s unlike anything I’ve had before. Such nuanced flavors coaxed out of the center of something that most people just throw away. Scoop after scoop after scoop poured into what came out to about 12 dollars worth of fresh tortillas eaten with religious fervor to the tune latin jazz on a rainy day in Kent.

When the bones are bare and the Tim the Toolman Taylor grunts have begun to fade from the ears (but probably never the memories) of those around us, the waitress takes away the husks and Krishan and I sit, leaned back in our chairs with the vacant, wrung out expression of two men who’ve witnessed a star exploding and are waiting for the heat to catch up to the light and vaporize us, humbled and grateful for it.

In short, It was really good. All the eye gouging metaphors and tongue and cheek exaggeration aside, Asadero Sinaloa, and this dish specifically, is not to be taken lightly. I wandered out of there with something heavy at one end the scale I use to measure things that I enjoy and, if you’re ready, I would strongly suggest that you get in there and do the same. Like I said, it’s not on the menu, but if you seek it out, they’ll give it to you. 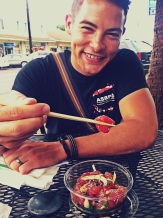