During my brief stint in the Oregon Army National Guard, I had a conversation with a sergeant who had served with an infantry battalion in Afghanistan. He and I were packed onto a bus that was going from one god-awful place to a different god-awful place to do some staggeringly unnecessary shit and he looked up from his rapidly dying phone to tell me about the time he watched the Special Forces operate in a war zone in Afghanistan. He was standing behind a .50 cal in the turret of a Humvee, kinda half awake, sorta bored, stacking rocks next to the weapons mount instead of scanning the street, when a Black Hawk came tearing ass over the top of the building behind him. It was banking evasively, streaking like a bird of prey towards a dome-roofed building at the end of the street. Right when it looked like it was about to smash into it, the bird tilted the nose up, turned its belly out and hovered there, ten feet off the roof. Ropes unfurled, men slid down them. When they hit the dome, the men unhooked, slid down their respective sides, each landing on a separate corner of its base. The bird took off, the men proned out on their corners covering the building from every angle and my sergeants rock pile fell over.

“I thought I was pretty cool,” he said. “Infantry dude, in country, behind a big ass machine gun. I was not cool. They were cool.”

Everybody has moments like those. We’re all reminded from time to time of where we stand in the grand scheme of things. I had a similar run-in, in a place called Cooks Tavern. 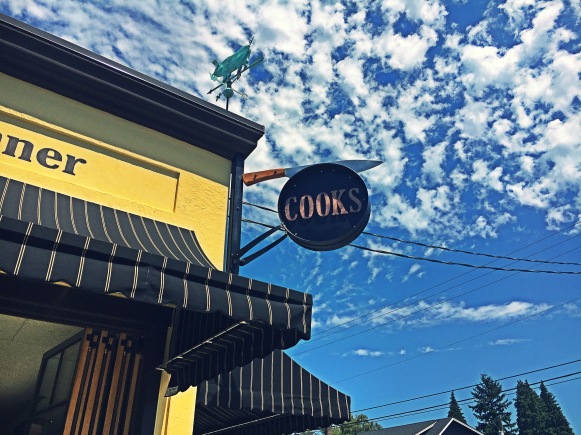 Anybody who talks shit about Tacoma and isn’t a crazy person hasn’t driven through the Proctor District on the North End. Anybody who has, and still does, drowns puppies in their bathtub and you don’t need them in your life. Proctor is unique, it’s vibrant, it’s beautiful and the concentration of good food in the relatively small area is enough to make me sweaty in December. Sure, the area isn’t necessarily completely established yet. There are a few hangers-on that the neighborhood could probably do without. Some half-assed restaurants, some empty, or soon-to-be empty buildings, dragging that rocket back toward the launchpad. But all in all, a quick jaunt through the Proctor District is nothing short of blissful. So last week, as I was jaunting about blissfully (in a manly way) I peeked my head into Cooks Tavern, wondering as I often do when I see new businesses in the area, whether this place was jet fuel or ballast. The smell of food wafting out of the wall to wall windows was provocative, and the fact that it was JAMMING with happy looking people at 11 am on a Monday seemed to also bode well, so I bellied up to the hostess stand and a waitress danced over, bristling with trays and glasses but all effortless in the eyes.

“Do you mind the bar?” she asked and she tipped her head at a baby who was waving at her.

“Not at all,” I said, and she led me through the throng of people, heads down eating, heads up laughing.

“Your server will be right over,” and she twirled into the back with her trays and cups.

There at the bar, I took a moment to survey the room. There was a sense of chaos, to be sure. The place was packed thick and deep with people, and the volume of sound was definitely noteworthy (the clinking of silverware and cups, laughter and conversation drifting through the undivided room and out of the massive windows). It was a controlled chaos, though. Like the mishmash of paintings on the walls (I’ll get to those later), the room was hand-picked crazy. That many people in one place aren’t quiet unless they’re facing the same direction and something terrible is happening in front of them. That much food doesn’t get prepared, plated and eaten sheepishly. So they left the floor plan wide open. Let the noises wash over one another. Let it sound like food, unhindered, warm and contrasting like the colors on the walls. When I was back around in my seat the bartender was in front of me, perky and knowledgeable, mixing drinks as she took my order. She eyeballed something over my shoulder as she handed me my water, and  I followed her gaze to the door which suddenly had a line of people at it. No biggie, she turned to a server who was punching an order into the computer next to her and said, “Go grab [the manager whose name I don’t remember]. We need a hostess, for a bit.” The server grabbed her and she darted out of the back to handle it. The whole place was whirring. It was like watching juggling, but enjoyable. 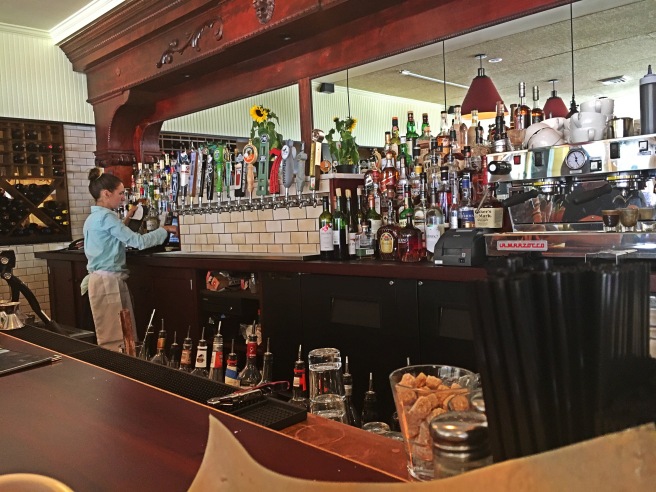 I grabbed the manager [whose name I have egregiously forgotten] on her way back from seating the huge group at the door and asked her about the place. She told me.

Cooks Tavern opened 3 weeks ago in what used to be trainwreck of a building. “Almost a teardown” were the words she used. I’ve since seen photos of the place in the caterpillar stage of its transformation. It wasn’t pretty. In fact, the people behind the renovation weren’t even convinced the place was salvageable when they started. Now though…. I wanna live here. There’s a dark wood bar, a copper counter over which the cooks pass food, clean lines, warm and cold colors and a single unfinished chunk of wood beam with the words “This Might Work Out” scrawled across it in Sharpie, a hat tip to the moment the contractors realized that the fevered dream of turning the dilapidated building into something usable might be possible. The restaurant is owned by Chow Foods, the people behind neighborhood oriented restaurants like the 5 Spot in Queen Anne, the Hi Life in Ballard, TNT Tacqueria in Wallingford and Endolyne Joes in West Seattle. 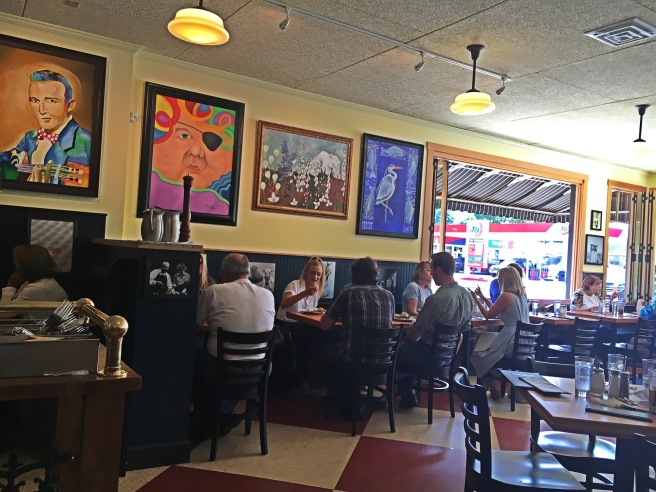 Cooks is their first project in the South Sound and Chow Food’s devotion to keeping things local seems to permeate the place. I heard the bartender saying that the ice cream used in the desserts is from Ice Cream Social (you might remember them from a previous foodgasmic post). The beers too are mostly local taps, and all the paintings hanging on the walls are by local artists and will be rotated out seasonally to make room for new art from new local artists.

The manager was in the process of explaining that the dinner menu will be rotating along with the art work to pay homage to food all over the world when my food appeared in front of me like a mirage. The bartender said some stuff that I didn’t quite hear and the manager said something to the effect of “enjoy your food”, but I was almost totally dead to the world at that point, because…lamb burger. 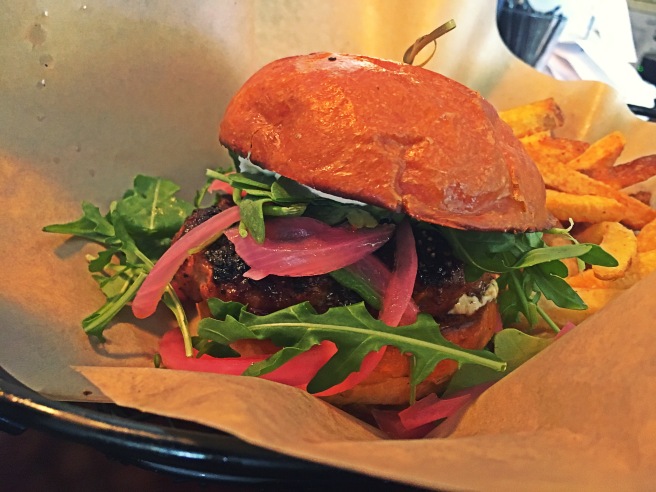 Those are just words though. They do nothing to capture the “wake up in a cold sweat jonesing for it” that this burger really represents. Everything about it is surprising. First, if you’re thinking that having goat cheese and lamb on the same sandwich together is a recipe for a taste too funky to be good, you’re wrong. I mean, it certainly could have been. I’ve had similar combinations that make you wonder whether you had eaten a burger or been tea bagged by an Elk. But whoever concocted this bad boy knew exactly what they were doing. The bacon shaves the sharp edges off the gaminess of the lamb and the finely chopped, expertly pickled red onion rounds it out completely. The flavor profile that you’re left with is tangy and smooth with just enough of the wildness that you want when you order lamb or goat cheese. The fries on the side were crispy and delicious.

“Who made this?” I said out loud, apparently.

“Patchen,” replied the bartender, pointing to the man behind the counter calling for food to be plated, seasoning, managing, handling.

Now, here we are, at that pivotal moment that I mentioned above. I’ve been cooking seriously at my house for a little bit now. I turn out some edible stuff most of the time and every once in a while I’ll make a dish that prompts me to find a mirror and hi-five it. I use spices, people. I seasoned my pans. I thought I was pretty cool. But sitting at that bar with all that goodness in front of me, watching ‘Patchen’ operate in that kitchen, I came to a realization. I am not cool. Patchen is cool. In fact, that whole restaurant was cool. A succinct group of professionals making magic only 3 weeks after opening their artfully renovated doors. Faced with that realization, I couldn’t help but have high hopes for Cooks Tavern. 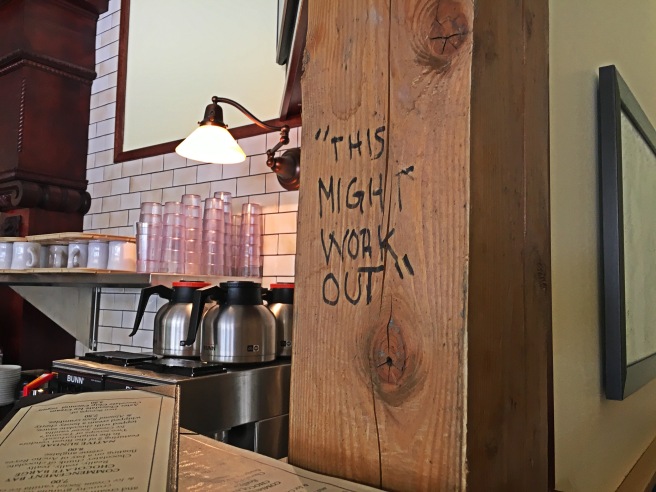