Standing on the balcony of our hotel, looking down into streets of Central Strasbourg, almost free of cars, almost free of people. The sun hung orange and heavy in the cloudless sky and Melissa lay out on the elegant bed behind me, trying to sleep off the stress of the drive in. On the street beneath me, a four man police patrol in riot gear threaded their way along the sidewalk, peeking into alleys, routing homeless people off of benches and away from garbage cans. Another four man team passed them and they all nodded to each other and continued on their way. I felt the contrast between Strasbourg and Baden Baden acutely at that moment and part of me longed for the coziness of that quiet German town. This a dangerous spiral to fall into as a traveler. Looking back over your shoulder wistfully, when you should be hopefully looking ahead. You

can’t compare cities, any more than you can sunsets or excellent cookies, and trying to do so just takes you out of the moment and leaves you frustrated. Nobody falls into a death spiral on purpose, though, so I stood there on my balcony looking down on this new place sighing bad vibes out into the afternoon air until there was a knock on the door. I opened it on Mom.

“We’re going to do something cool,” She said. “Wanna come?”

The Strasbourg Hospital was built in 1395. Because of the medicinal value of wine during that time, it had a cellar in the basement where they stored the wine that gave to their patients. That cellar is still in operation to this day. It produces 150,000 bottles of wine each year and houses over 40 ancient barrels of the stuff, at least one of which dates back to 1472. We walked to it in the stagnant sunlight, doing our best not to be the suicidal pedestrians from our earlier drive. Slipping through the throngs of people,

hearing Russian and German and French and Spanish all gurgling past us, babbling brook. We found the hospital through a wrought iron gate. The cellar down a flight of stairs. Cool air wafted through the place. The kind of chill you associate with cellars. The kind of damp and brick construction as well. We handed Euros to a woman at the front desk and she handed us listening devices, which were shaped like an old TV remote with a speaker phone on one side of it. Mine lights hung from the ceiling joists, covered in their ancient spider webs, growing their ancient mold. Wine casks the size of VW’s hulked behind massive iron bars with dates embossed on them. 1576, 1624. Unfathomable times that put America in a weird perspective. This place had beverages older than our country. It’s booze from 1796 wasn’t ready yet. What made us think our nation was? We wandered through this underground maze of history, learning about the medicinal uses of wine and the dissections that used to occur down in the place before the Inquisition and we unwound a bit down there. surrounded by ancient booze and the macabre, a PBS voice in our handset, murmuring factoids at us. 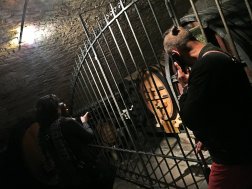 When we’d finished our tour, we went searching for libations of our own, moving with the masses between the buildings, soaking in the sights and sounds. Strasbourg hot potatoed between Germany and France for centuries and you can hear it on tongues and see it in the half timbered houses. Smell it in the cooking smells and taste it in the food. We sat on a French speaking patio, drinking German beer watching crowds shuffle past us, headed somewhere. We wouldn’t know where until the beers were gone and the tab was paid. Freshly oiled on hops and malt we coasted between two buildings and another Notre Dames leapt out at us. It did so the way the one in Reims had and ,again, I found myself absolutely transfixed by the grandeur of it. Rising from the city floor like the wrath of god itself. Excluding the shock value, though,the similarities between this building and the one in Reims were few and far between. Strasbourg’s Notre Dames was prickly and  intricate. Absolutely bustling with busy little images, topped with a green roof that resembled oxidized copper. This building was different from ones we’d seen before. Different as the cities that built them. But no less beautiful.