The sun rose over the  hills of Baden Baden, shining around the prickly spires of castles, and found me like a wet noodle in our hotel bed. The festivities of the day before had left me loose and limber and I slithered out of the sheets to the bathroom, where Melissa was getting ready to take a dip in the indoor pool beneath our hotel. I told myself I wasn’t going to go swimming with her, but I quickly did the math on how many pastries I could eat if I backstroked a few laps and the figures added up. I slapped around gleefully in the jungle heat of the underground.

Our crumpled can minivan huffed and puffed and doddered down the autobahn in the slipstream of sports cars that sizzled past it. We were inbound to Strasbourg

“Does the email from the hotel  say where to park?” Dad threw the question into the back seat and mom began flicking through her phone for an answer. We took our exit into Strasbourg.

“Not really,” she said. I peeked back at her, saw her brow all knitted up. “It says something about a parking lot near a park, but I can’t find the park on the map. Oh, wait… No… Hm.”

Strasbourg climbed up onto our windshield, buildings looming up against the sky. We all began to spastically type the name of the park into our maps as Dad steered us to the city center blindly. Finally, we found something that seemed comparable to what was on described in the email and I began to navigate us to it.

After my relaxing swim, we all walked along the Oos in dazzling sunlight, gawking at the houses along the gurgling water, up the streets of Old Town Baden Baden, mostly empty in the early morning. Cafe König was tucked down one of veins that carried foot traffic away from the heart of Old Town and we had wandered past after closing time the day before and almost broken into the place to get a better look. Cakes and pies and tarts like something out of a Willy Wonka wet dream set up behind the glass sparkly and exotic. Yelp had a lot to say about the place, and none of it was negative, so we stopped in for their breakfast menu, crowded ourselves around a table awash in the clinking and clanking of polite company and waited for the show to start.

A half mile from the center of Strasbourg, the streets filled up with brake lights, cars laying on horns and steering down impossibly narrow alleys, side views slapping against bicyclists, who just rode on, BMXing their way between fenders, whispering into traffic like they weren’t made of meat and pain receptors.

“Fuck.” Dad muttered into the steering wheel, draped over it, sweating. The closer we got to the middle of things, the worse it all got. Pedestrians stepped out into the street with their phones in their hands, oblivious to squealing of horns and tires. Testing brakes and reflexes with their souls.

“Fuck.” we all muttered, like an anthem. We finally pulled into the parking lot, sweatier, and dumped a handful of change into a meter. “PAID”, it said.

The walk to the hotel wasn’t as hectic as the driving. We pounded feet between old high rises full of new businesses, SUPERDRY and LULULEMON and MCDONALDS looming in neon overhead. Busier than Baden Baden. Grittier.

“Your room is ready,” the woman at the hotel reception said and there was a ‘but’ just below the surface of it. “But it sounds like you’ve parked in the wrong area.” She unfolded a map and drew an X on it. Then she drew a squiggly line back across the mayhem through which  we’d just driven, over bridges and down alleys to a gate that she would open when we got to it. We left our bags with her, snaked our way back to the car.

Breakfast was delightful.  A tray of pastries that we tore into with fervor. Cheeses and meats curled on plates, and we mashed them into croissants and folded them into our mouths. Organic eggs upright in a little dish and we cracked half the shells off, scooped out the gold with a spoon. Orange juice, coffee, butter and jam, bliss in several consistencies. We left a tip and a mess and we floated out into the daylight, wondering what other treasures the day had in store for us.

We found two men combing the parking lot, looking swarthy, on the prowl. One was wearing a multicolored tracksuit,  ill fitting shoes, decked out in all gold, bracelets and necklaces and earings. His compatriot looked exactly like Nico Bellic from Grand Theft Auto 4. Down to the leather jacket and sweatpants. I watched them wave a car into the 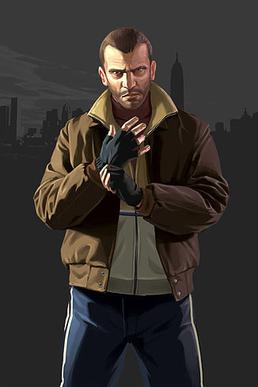 lot. Took money from the confused looking driver to pay the “parking fee”, pocketed it. Nothing about them said, “city employee”. As we approached our car, Tracksuit started to sing a song, and it was the kind of nervous singing favored by men who want to look like they aren’t nervous. My hands left my pockets. My family continued to the van and I intercepted tracksuit behind it.

“You pay,” tracksuit said, and his hand opened and closed between us like, gimme gimme.

“we paid.” And I pointed at the meter, still green.

The car started, reverse lights painting us white, toe to toe. GTA 4 smelled trouble and started over from his corner of the lot, stuffing cash in his pocket.

“You pay.” Tracksuit said again, gimme gimme. All the happy-go-lucky fell out of his voice and I remember deciding that if there was going to be a fight I needed to start and finish the Tracksuit portion of it before GTA 4 got there. Tracksuit’s carotid was banging away next to the spot that I’d picked on his jaw, GTA4 still in route, picking up the pace and I saw Tracksuit smell the serious in the lot and decide that whatever scam they were running would survive just fine without my portion of the parking fee.

“Tranquil” he said, tripping over his feet stepping back and I thought, if  I hit him now, he’ll fall down, even if I don’t knock him out.

“Okay, Okay, Calm down” he said and I followed him back and the van followed us back and the door slid open and I was in it and we were gone. Tracksuit standing next to GTA4 in that parking lot looking shaken in the rearview. We jostled back through the fray of car horns and suicidal pedestrians, rattling over cobblestones and holding our breath in claustrophobic alleyways, screaming obscenities at other cars. We got lost. We found our way. We got lost again. When the front desk lady finally threw the gate open for us and we crash landed the van into the parking area there was a breathless silence in the car that was finally broken by Melissa.

“ Well that’s two weeks off the end of my life.”

And we all laughed and wondered what the fuck had gotten us from breakfast and Bedlam.

One thought on “From Breakfast to Bedlam: Day 1 in Strasbourg”