San Fernando Roasted Chicken is very similar to the guy down the hall from your apartment who does naked tantric yoga in his unit, in that you walk right past it every day and you didn’t even know it was over there doing that. Unlike naked tantric yoga guy, however, San Fernando is amazing. Yoga guy fucking sucks. Yoga guy smells like dreadlocks.
San Fernando doesn’t smell like that at all. Just walking through the door, the aroma of piping hot goodness with the weight of experience behind it hits you right in the booger chute. It’s a smell that triggers salivation and goosebumps but most notably, a feeling a comfort. Not necessarily, “just like mama used to make” comfort, although that certainly might be back there. Instead, it is a feeling of comfort more akin to having a parent lift you into their arms. That smell of chicken crisping on an open flame, hint of oil from the fryer, says, “Relax, we know what we’re doing.” And they most decidedly do, but we’ll get to that.

First, there are a couple of things to cover, because if you’re on a follow along adventure with this piece and you’re standing in this place, marinating in the smells of it, you’ve probably started to notice something. 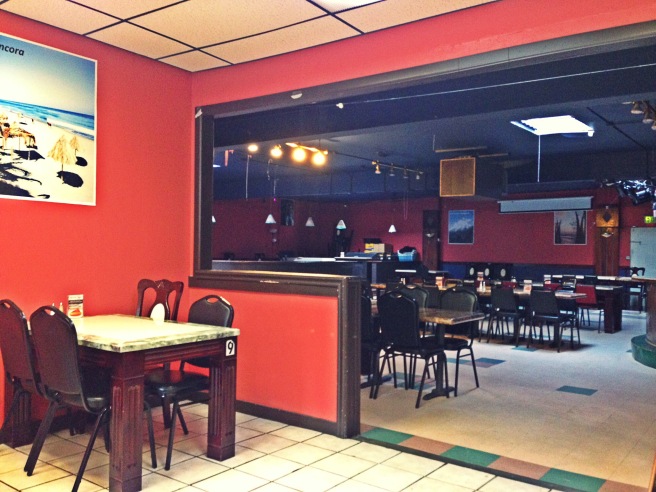 It’s a little weird in here. Not gimp suit weird, but…. Different. From the outside, it almost looks like it used to be open, but hasn’t been in a while. You might notice the paint is fading and that the lot is a bit unkempt. When you’re through the door you’ll see lots of red paint and a dusty looking beverage cooler unceremoniously dumped by a window. The menus have been updated by hand, in marker. The descriptions are in Spanish and English and as you’re trying to get that straight, you round the corner and what’s this? A full size ballroom. Most likely the lights are out over there and it probably looks like the kind of area that naked tantric yoga guy might hold a class that you SUPER don’t want to watch. That mental image is cause for some alarm so you venture to the restroom to splash some water in your face and stumble upon the two toilets, side by side with no divider between them like the little girls from The Shining. 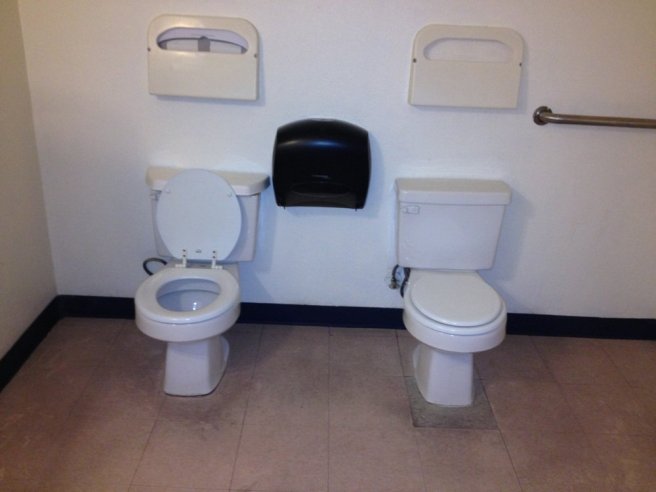 You’re starting to think, what the fuck am I doing in here? Well,take a deep breath. Take it through your nose. Yeah, remember now?. Relax, they know what they’re doing. 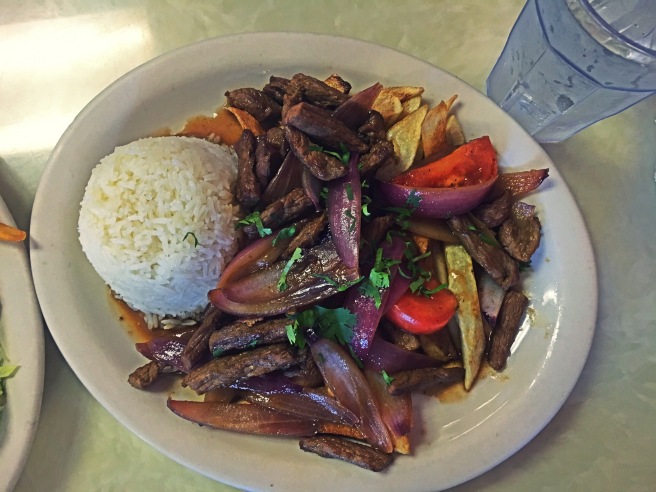 Now, what happens when you cram a bunch of people from all the corners of the globe into a country with the biodiversity of, shit, I don’t know, the Amazon Rain Forest and you just let them cook? Peruvian food. Eric Asimov did a piece on a hotstepping Peruvian food movement in New York in the late 90’s. In it, he asked a chef who was turning and burning latin dishes about Peru’s contribution to Latin food and the guy said, “”Peruvian is the single most important cuisine in Latin America, with a repertoire of dishes maybe bigger than France,” (1). Damn. That’s heavy. But it’s not incorrect. Peruvian food history is a flashlight beam on a dark night. Hot and white in the center where the Incas kicked it off and stretching out into infinity in an ever-widening cone as the Spanish conquered the Incas and brought slaves in from Africa and the Chinese laborers came to fill a void that slave labor left  when that was finally abolished  and people immigrated and immigrated and immigrated, all of them leaving behind new recipes and twisting good ingredients into sensational food. Food like Ceviche and Papa A La Huancaina (both of which are available at San Fernando). Food like Peruvian roasted chicken. 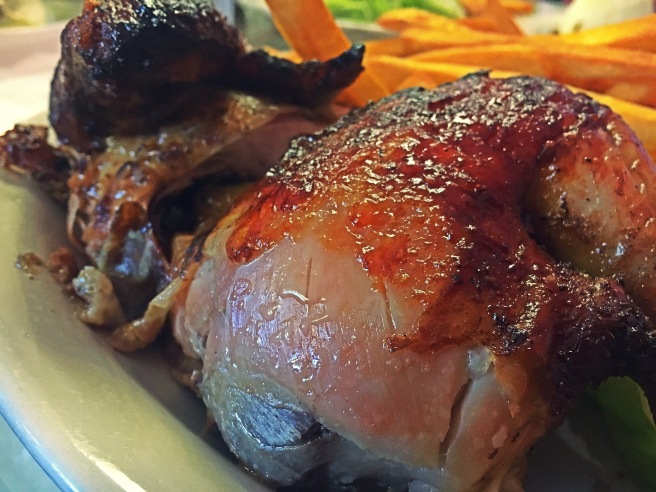 According to aboutfood.com (2) Peruvian roasted chicken was dragged into the spotlight by a restaurant run by Swiss immigrants in the 1950’s. They went all “Rain Man” on the spices and then all “Monster Garage” on some patented chicken spits. (they’re still open if you’re in Lima and you haven’t had a mouthgasm in a while. Find it here.) In the time following, Peruvian chicken has found it’s way all over the planet the way only really bad music and really good food can. 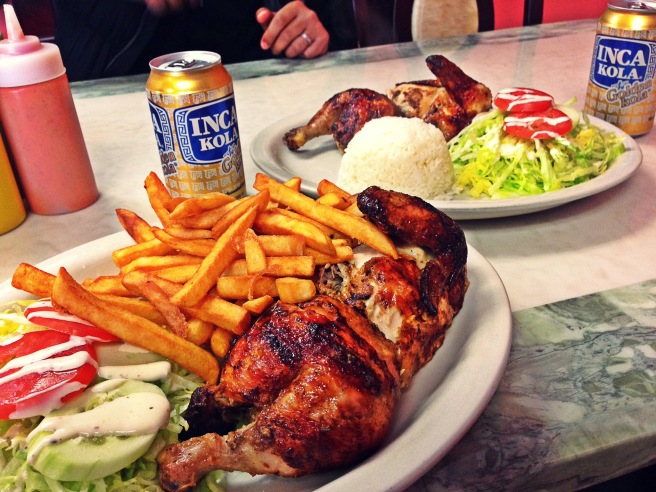 Which brings us, finally, back to San Fernando. Seated in a weird red corner, with a half a roasted chicken on a bed of french fries. Steam climbing off the plate and drifting lazily into the vacuous space of the unlit ballroom. All is right in the world. According to everything I’ve read about Peruvian chicken, it’s the spices that really distinguish it. The first mouthful of San Fernando’s bird drives that fact home like wedge with a sledge behind it. It’s so perfectly seasoned, salty but not cloyingly so. Everything is just there to bring out the richness that the chicken came with. Juice drips down onto the plate and adds property value to the crispy fries below. There’s a point in the midst of all the eating in which the fork becomes a hindrance and then it’s all fingernails and grunting noises. There are traditional sauces in squeeze bottles and squirting noises and things being dipped. A veritable chorus that would make naked yoga guy blush. You’re sweating. You’re salty. You’re going to want a beverage. I’d suggest washing all that down with some Inca Cola, a local Peruvian soda (like if Sprite and bubblegum had a love child) or some chicha morada, which is a purple corn punch that (I’m told) tastes faintly of licorice. 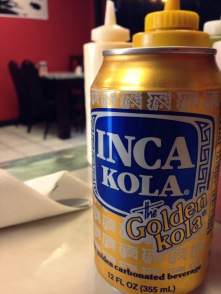 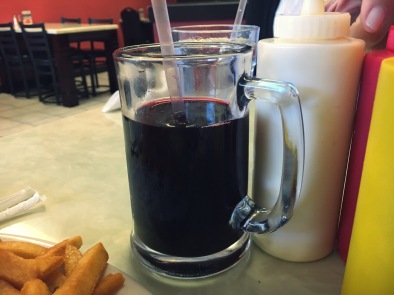 As the haze of good food fades, you may notice something. The place stays unusual. In the midst of all that nirvana,  the weirdness around you never fades into the background or morphs into understanding, but instead it just kinda gets folded up neatly and tucked into the “who gives a fuck” folder. Who cares if the paint is faded or the toilets are placed as though you were meant to hold hands with someone while you used them?  Weird ballroom? So what? The bottom line is that these guys are dutifully cranking out fantastic, authentic Peruvian cuisine without gimmicks or apologies, and they’re doing it in the heart of a city that’s stripped places with better style and curb appeal down to the marrow and tossed the bones in the trash.

So, if a place like that has value to you, I would strongly encourage you to stop walking past San Fernado, and walk into it.

If you do, you will  shuffle out onto the whoosh and roar of  Rainier avenue, picking bits of cultural diversity out of your teeth, nursing a belly filled with chicken and potatoes and a feeling of comfort, because you trusted them to know what they were doing, and they did. 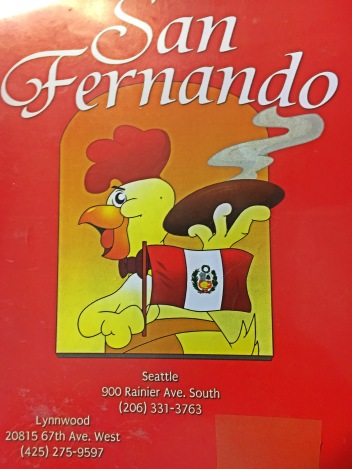